Electronic signature solutions such as DocuSign enable significant gains in productivity and security, particularly in the context of the widespread adoption of remote work and the mobility of company employees.

Extensive integration with DocuSign allows WorkflowGen to manage end-to-end digital processing of processes requiring the generation of formalized documents such as contracts, quotes and purchase orders involving one or more signatures.

The process of developing and validating a commercial proposal integrates all of the components necessary to provide a unified and optimized experience for the participants involved. WorkflowGen allows the initiation by the sales team of a client's request for proposal, the performance by the project manager and technical experts of the analysis and costing phases, the automatic generation of the proposal in due and proper form in PDF format from the data entered in the WorkflowGen form, the validation of the proposal by the sales team before submission to the client for signature through DocuSign, and finally the return of the signed document accessible in WorkflowGen. 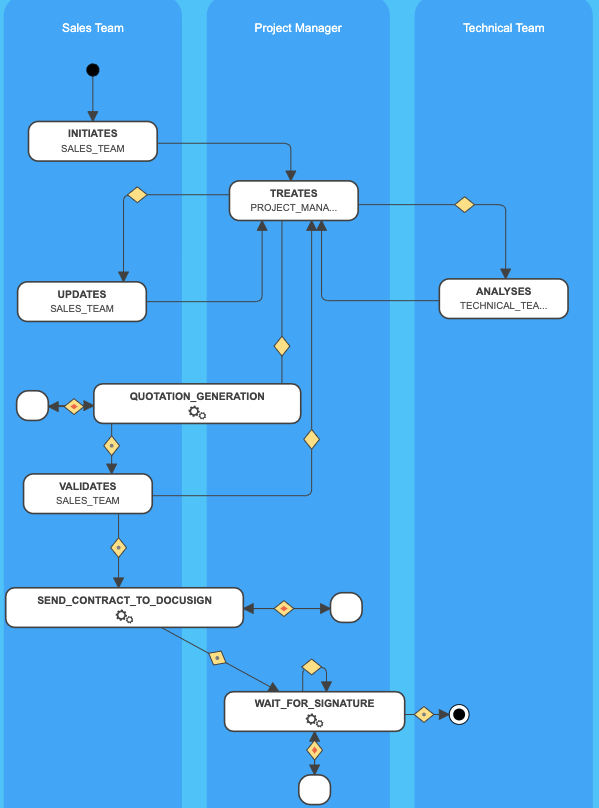 The workflow is created using WorkflowGen's graphical workflow designer by integrating human actions for the submission, analysis, costing and validation of the proposal. The QUOTATION_GENERATION system action makes it possible to generate a PDF document from a previously created template that will be automatically populated with values entered in the WorkflowGen form, and will contain information on the customer concerned and the details of the items and amounts that make up the proposal. The DOCUSIGNSEND system action then sends the PDF business proposal via DocuSign for the customer's signature.

The form is created using WorkflowGen's integrated form designer and contains the fields and sections needed to submit information on the client as well as their requirements and additional details on the project. 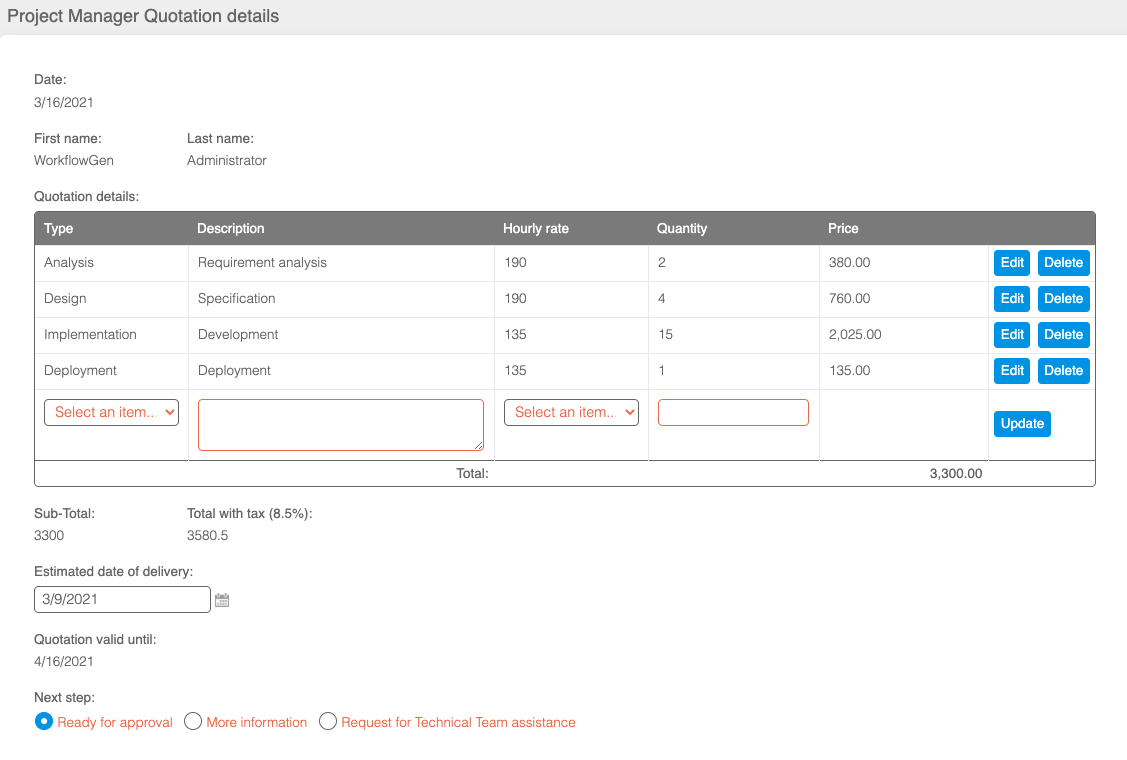 The project manager enters the elements of the proposal into a dynamic gridview linked to a repository containing a list of stakeholder profiles and the rates used. Calculations are performed automatically, generating amounts both excluding and including taxes. An expert can also be called upon as part of the proposal development, and can have their own section in which to submit comments. The sales team can consult the proposal, which is generated as a PDF directly from the WorkflowGen form using the integrated viewer functionality. 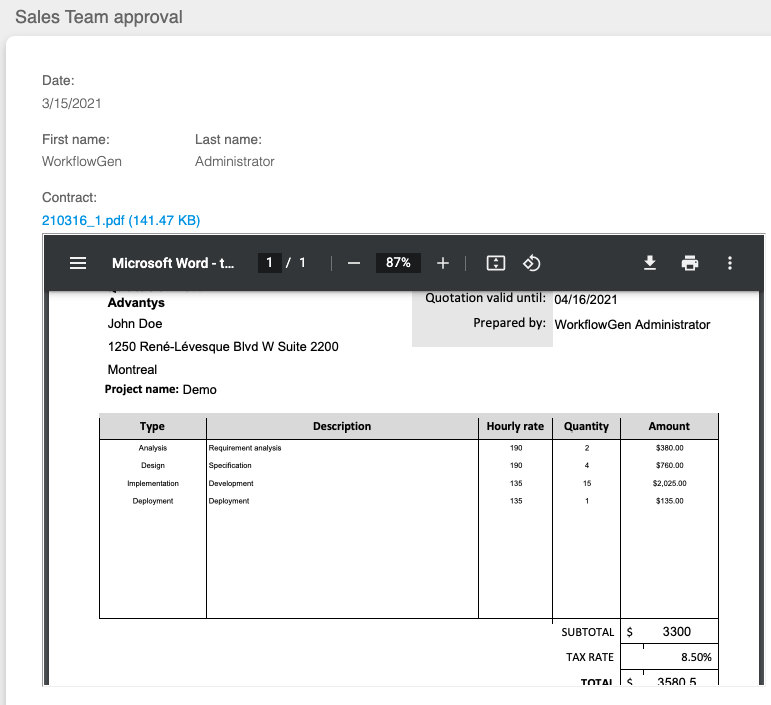 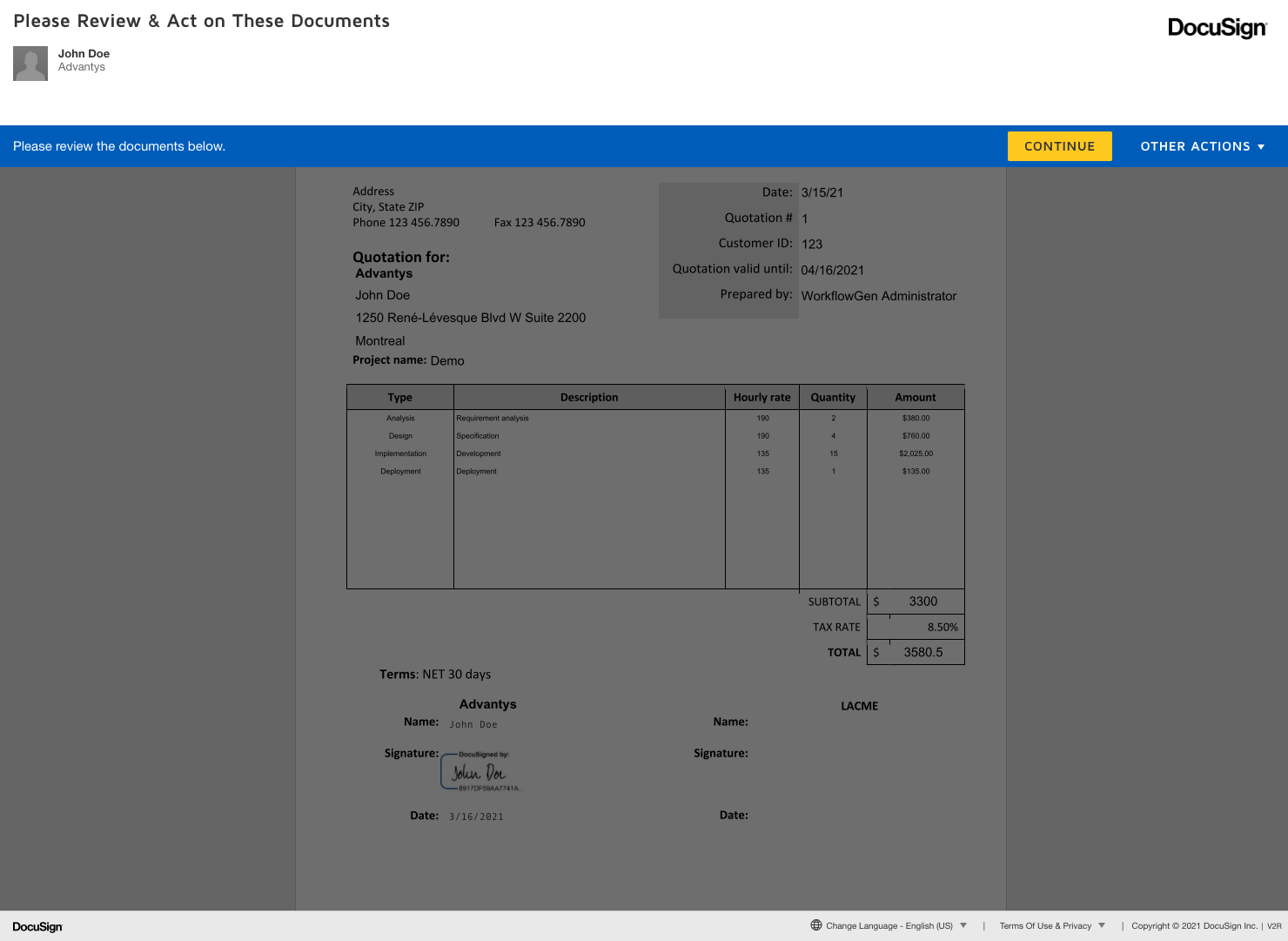 Find out more with a solution expert